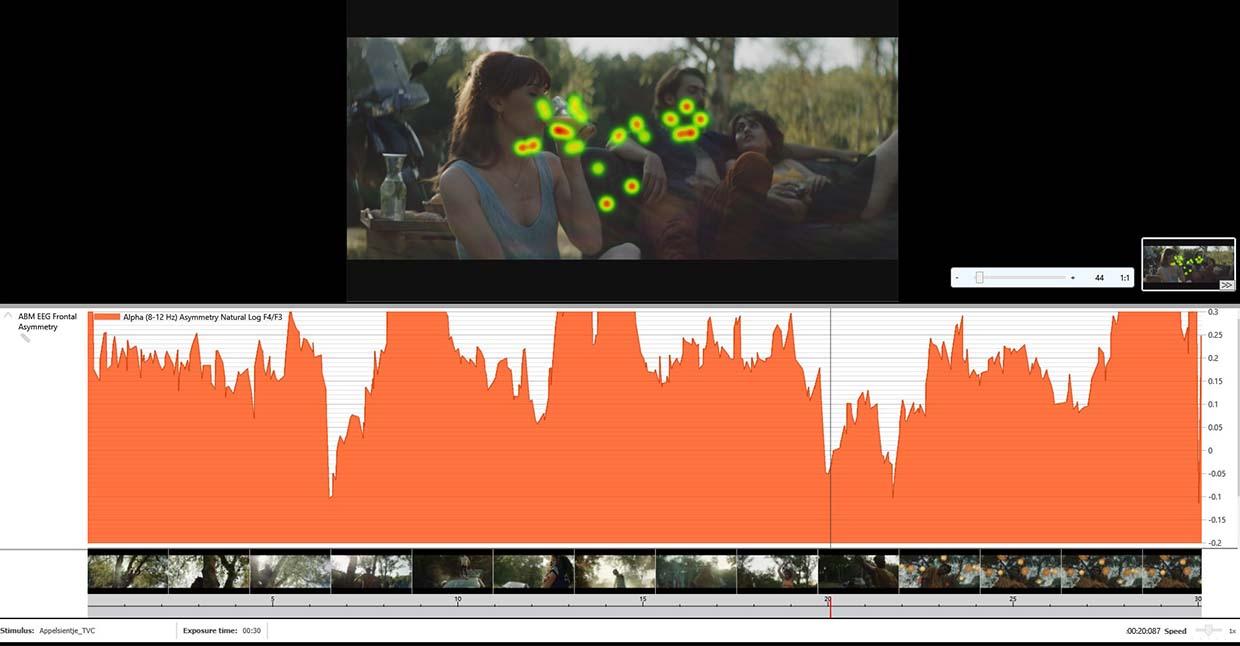 5 neuromarketing advertising examples that will help you make better commercials

We’ve got some shocking news for you.

1 out of 5 commercials causes sales to decline (Jones, 1995).  Think about it, you’ve just ordered millions of dollars worth of media time to air the perfect commercial. But after a few months of broadcasting your masterpiece on national tv, you don’t see the numbers going up.

On the contrary, your sales are declining. How could this have happened?

Luckily, neuromarketing research can help us to answer this question – right at the start, before you’ve even aired the campaign. Methods like EEG are able to predict sales impact and detect exactly which shots are working positively for the brain – and which ones don’t.

By using brain science, you can avoid investments that will destroy your sales and instead reach maximum impact for each of your future campaigns. Cause in the end, our brains are the ones who decide to buy or not to buy. But how does this work in practice? In what way can neuromarketing help? In this blog we show you 5 neuromarketing advertising examples.

We always say: people don’t do what they say and don’t say what they do. Of course, you can ask people anything you want about your advertisement and they will always give you an answer. Just not always the right one…

Cheetos found confirmation for this. They asked focus groups for their opinion about one of their advertisements.

The people in the focus groups told Cheetos they really disliked the ad in which a women played a prank on her friend by filling her white laundry with orange Cheetos. However, when Cheetos researched the ad with neuromarketing, EEG revealed that in fact people really liked the advertisement. They found it funny! Apparently, people in the focus groups were just scared to come across to others as an asshole.

This typical neuromarketing example shows how neuro can reveal hidden responses and get rid of social desirability. Cause in the end, we want to know how people really feel

In neuromarketing advertising research, most of the time brain activity is combined with eye tracking data. In this way you can see exactly where people look at and what reaction this produces in the brain.

One of the things we see over and over again in our own research, is that approach motivation (which positively predicts buying behavior) declines as soon as there is no clear focus point in a commercial. So, the brain doesn’t like it at all when we don’t know where we’re supposed to look.

Therefore, always avoid multiple focus points in commercials. Make sure people know where to look at! 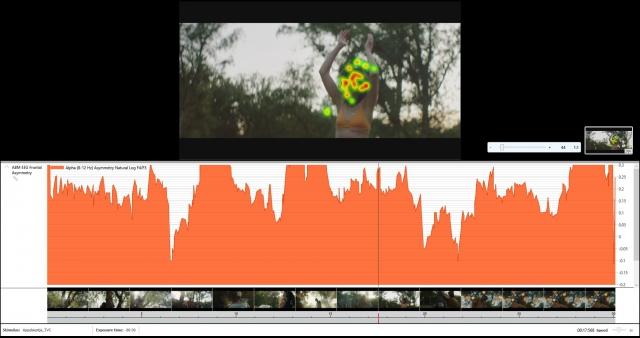 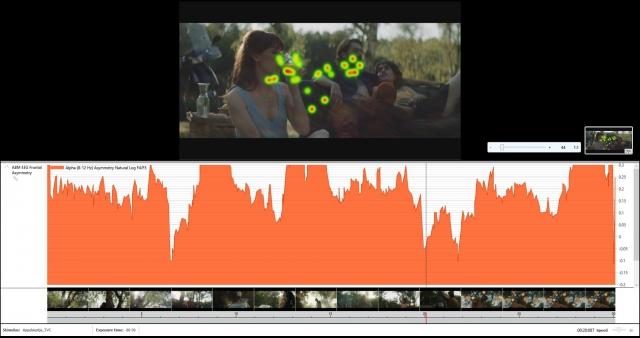 Neuromarketing advertising example #3 What are you looking at?

A third neuromarketing advertisement example confirms the fact that humans are social creatures. There’s nothing new about that. We love to follow the behavior of others. We look at others to decide which restaurant to go to, which book to buy and which club to go to.

Not only do we follow the behavior of others, we also follow their gaze. Knowing this, we can smartly adjust this knowledge in advertising. Let’s look at the following example. Neuromarketing methods such as eye tracking reveal specific viewing patterns.

In this advertisement the hotspots on the heatmaps tell you what people looked at the most. Warmer hues indicate more eyes looked at that spot. The heatmap of the first image shows us that everybody saw the baby’s face. Unfortunately, this cannibalized the content where the advertisement was all about. 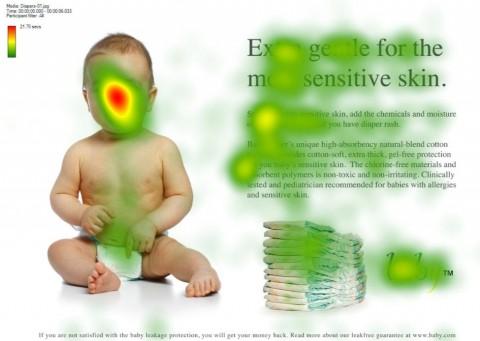 But what if we make the baby look at the content? Voilà a shift in attention to what you want others to see! Easy as that. 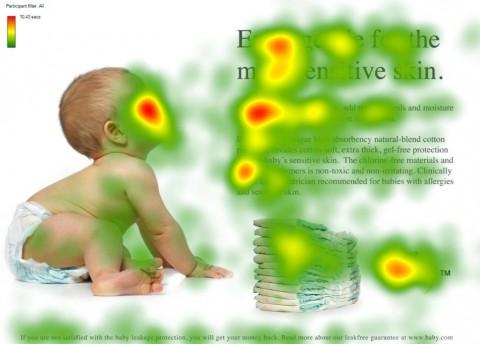 Neuromarketing advertising example #4 Zooming in and out of emotion

Another example of something we see repeatedly in brain data, is that camera movement can make or break an ad. Moving in or moving out goes perfectly together with the emotion we experience during this movement.

When the camera zooms in, we mentally zoom in too. We feel positively engaged! Zooming out has the contrary effect. So, a simple take-home point if you want to keep your potential customers engaged: avoid zooming out and backwards movements.

However, there is one exception. Zooming out can work when it reveals new information to the viewer. For instance, a backward movement revealing a second character hiding behind a wall.

Do you remember the commercial of Sony Bravia in which thousands of balls bounced through the city center of San Francisco? Neuromarketing advertising research revealed that there is one specific moment in this commercial which evokes extremely positive emotions.

I’m not sure if you remember the commercial, But, I was talking about the moment where the frog jumps out of the drainpipe (1:42 min). The funny thing about this is that the shot wasn’t planned at all.

Sony Bravia also tested the commercial without the frog. What happened? When the frog wasn’t part of the commercial, the commercial’s engagement diminished massively – even during shots that were completely unrelated to the frog, such as the product USP’s and call to action!

That’s why we coined the term frog effect: one specific shot, that carries the entire commercial!

Now you’ve seen 5 typical neuromarketing advertising examples. But of course, there are many more to learn from. Want to find out more about neuromarketing research? Give us a call. We’ve got the coffee ready and waiting in our livingroomlab!